Over the Rainbow with Ross 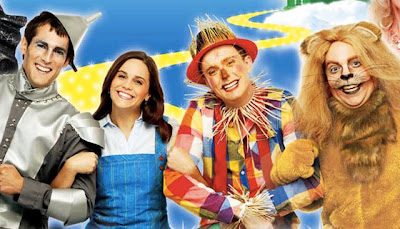 Ross Petty's annual Christmas Pantomime has been a beloved event in Toronto for 16 years. I can remember going as a kid and getting to see Canadian legends like Mr. Dressup (Ernie Coombs), Fred Penner, Kurt Browning, Rex Harrington and Karen Kain onstage as absurd twisted fairy tale creatures. It was the thrill of the season (never so much as the year when Aladdin featured household favourite Bret "The Hitman" Hart as a hilariously threatening Genie). We went every year, long past the age when it really made sense for me and my older brother to be there. But that's the thing about the Petty Panto, it's got jokes for everyone, and that camp-happy infectious optimism is even more important for us Scroogy adults misplaced in the audience. 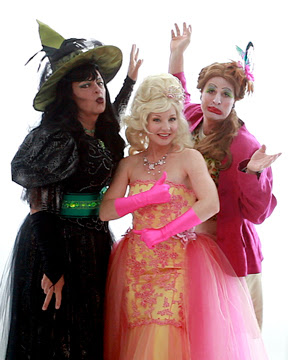 This year's offering is The Wizard of Oz, except in this version Oz is actually a bizarro version of "Aus"(aka Australia), the tin man is Dorothy's love interest, the Wizard is a rock and roll wannabe and it's a massive blizzard that sweeps our heroine away from her hometown of cold and urban Toronto instead of a tornado from Kansas farm country. Oh, and it's Glinda who guides us through the story; well, it's the Glinda figure, who we've actually got is Splenda, the good witch of the South (the direction L Frank Baum forgot to name). Jessica Holmes is hilarious perfection in the odd-ball role, all lisping good intention with a feisty wit she pulls out just fast enough to knock the practiced Petty off his villainous feet. The man behind the brand, producer Ross Petty, steps into his usual role as the boo-able bad guy with the same deadpan, deep-voiced silliness he plays every year (this time as the predatory Wicked Witch of the West, riding around on a motorized broom/bike and casually hitting on Russell Peters who made the mistake of sitting in the front of the audience where Petty could find him).

Of the many, let's call them "liberties", co-adaptors Nicholas Hune-Brown and Lorna Wright take with Baum's famous work, one of the biggest is the expansion of Auntie M into an excitable and world-weary, but still fabulous drag queen named Aunt Plumbum (a recurring character from previous Petty Pantos) who gets carried along on the adventure by being in a portapotty at the wrong time. As played by Dan Chameroy, Plumbum easily becomes a crowd favourite (even among the kids, who clearly don't get 90% of her jokes). I adore Chameroy, have for as long as I can remember, and what makes his Pantomime performance so wonderful is that the dashing leading man (known for machismo roles like Gaston and Miles Gloriosus) seems like he's having more fun than all the kids in the audience combined and doesn't give a flying banana about anything but the silly exuberance of it all. There's a great joy to any Chameroy performance, but he's never seemed happier than he does in Plumbum's tacky spandex and insane wig. 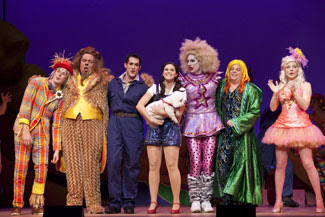 As for the central quartet heading down the yellow brick road, Elicia Mackenzie is an adorably spunky Dorothy, a misplaced snowboarder with mad karate skills and a strong mezzo belt. Her chemistry with Yvan Pedneault's quirky magician/miner/temporary tin man Donny isn't the strongest, but with Shawn Desman's catchy and possessively Torontonian "Night Like This" as their adorably enthusiastic love anthem, they're cute enough to get away with very little sizzle. As for Pedneault himself, he's as charming as ever, if a little stiff beyond his tin man duties. He and his wife (Kelly Fletcher, ensemble/dance captain) provide the show's biggest scene stealer- their little dog Hauli, who plays the cutest Toto ever seen. Steve Ross and Kyle Blair are my favourites though, as a fussy/cuddly cowardly lion named Napoleon (Nap) and a hilariously limber, self-deprecating brainiac named Fig Newton, after the cookie not the physicist (aka Fig the Scarecrow). Both give wonderful comic performances (including brilliant physical work from Blair) and their strong friendship is more touching than any on stage.

The adaptation is a rollicking good time (though I could have done with more inventive song choices- Lady Gaga and "Funkytown"? Really?) and worth the price of admission for the cast's infectious enthusiasm alone. Oh, and any time a chorus of expert male dancers whips out a rendition of "Macho Man", my life gets just a little bit better.
Posted by Kelly at 1:04 a.m.