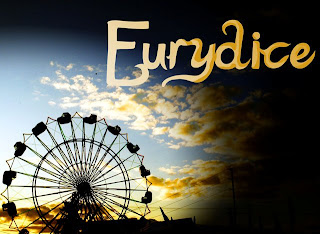 I went to see Eurydice with a friend who has never seen a show by the Independent Drama Society. The show was set to begin at 8pm. It took him until 7:58 to declare "I'm in love with this company". My fandom for IDS has been growing exponentially with every production they've done, but, as my friend so conveniently put into words, they've never been quite so lovable as in the moments that precede their current production of Sarah Ruhl's Eurydice (playing at the Boston Center for the Arts until April 30th)

Click Here to contribute to Toronto's Coolest Classical Company
Posted by Kelly at 10:49 a.m. No comments:

The Tale of Sweeney Todd 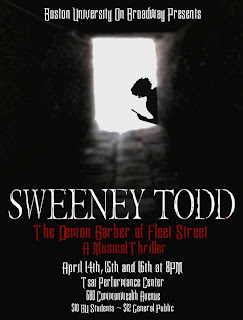 BU On Broadway's Sweeney Todd premiered last night and will continue all weekend in the Tsai Performance Centre at 8pm. The production was a breath of fresh air in BU theatre as it united some of the school's absolute brightest talents against the backdrop of a challenging and entertaining piece from Stephen Sondheim.

Directors Jillian Angelone and Brian DeVito brought a superb mix of expertise to the table in their first directing effort with OB. 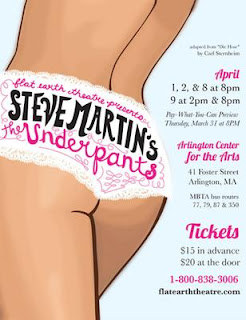 Flat Earth Theatre’s production of The Underpants (by Steve Martin) was a pretty enjoyable way to spend an evening. It was an interesting ride: sometimes I was totally enamored with the actors, and sometimes I was thoroughly underwhelmed by the technical aspects of the show and select performances, but the script saved the day.

I had never seen or read The Underpants before, and hadn’t done much research either (I know, bad reviewer, bad!) so I had only vaguest of ideas as to what I was walking into. I was delightfully surprised. The script is hysterical: some of the jokes are philosophical parodies, some are scatological, and a lot of the farce has to do with underpants (surprise, surprise), sudden entrances and exits, usually into hysterically awkward tableaus, and misunderstandings. It was a delightful script that demanded a certain pace from the production to keep the whirlwind of circumstances going.

Guest Review: "The Merchant of Venice" 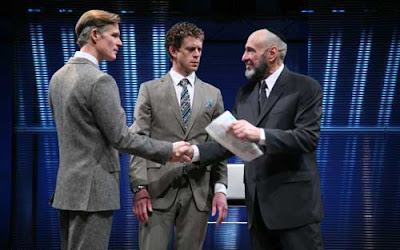 Theater For a New Audience's The Merchant of Venice, a restaging of a New York version of Shakespeare's famously controversial "problem play", is an odd duck of a production-- a whack-a-mole of quality that pulls concepts and character arcs off stage just as they begin to fully form. The production is nowhere near a loss-- the concepts proposed are always interesting and occasionally fascinating, and the acting is solid with hints of stellarity-- but they never come together in a complete, cohesive whole. 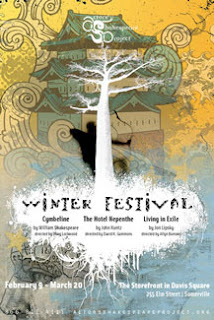 The final production of The Actors' Shakespeare Project's Winter Festival was Living in Exile. The production hit roadblock after roadblock on its way to the stage, including an actor's major injury, a weeklong postponement and the death of the playwright, Jon Lipsky. But when I finally got to see the show last Sunday, it was none of those things that got in its way. The play itself just wasn't as good as the two superb shows I'd seen earlier in the Winter Festival.

A modern re-telling of the Iliad, the fascinating story is presented by two actors in one confusingly dull 2 act play. The triple casting of the male lead (Achilles, Agamemnon and Patroklos) is befuddling from the get-go as his characters begin to blend into each other. But the biggest problem with the script is the way the story is told. It's at its best when the characters engage each other in a scene, but most of the play is a series of long monologues, telling us the story instead of showing it to us. The whole thing seems more like it belongs in novel form (with a proper narrative voice), instead of presented on stage. 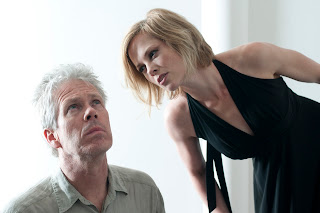 The actors, too, created a strange dynamic in which their technical skills were obvious but they still somehow fell short. Robert Walsh, one of the ASP's resident powerhouses, was confined to a wheelchair for the entirety of the play and managed to not be hindered by it at all. The expressive actor's strong vocal and facial control really showed, but there were few moments when he made me really feel for his characters (though there were a couple- all as Patroklos). Tamara Hickey as Briseis had even less success moving me, though her strength and commitment easily proved impressive.

The play was strangely set in a living room and employed what seems to have become the ASP's go-to device of symbolic, almost Brechtian sound from visible actor/musicians offstage. In fact the night's most impressive performer was one of these musicians, Ruby Rose Fox, who voiced everything from deathly arrows to haunting soundtrack to the offstage voices. Fox was a highlight in this incarnation of a device that was significantly more effective in Cymbeline only a few weeks earlier.

Overall, Living in Exile didn't live up to any of its potential, making it easily the weakest link in an otherwise truly excellent Winter Festival.