Shakespeare in Action's second tragedy isn't as strong as its repertory companion Romeo and Juliet. While the casually modern staging works wonderfully in R and J, in a modern Mackers a low budget can make things look haphazard because of the precision necessary to pull off a military look. The company would have been better off going bare bones with it- all black, no set; just actors, their voices and some weapons. As it is, the capable company fights against the contradictions of their world the entire time- it's presented as though it's supposed to be big, but it just isn't.

From My Cinema: Anyonymous Takes on Shakespeare 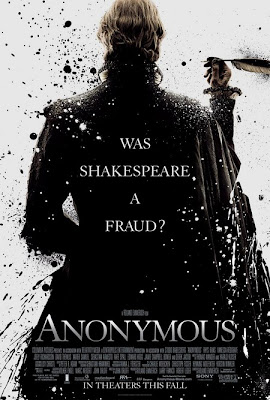 In the weeks before Anonymous hit movie theatres I was asked no fewer than 20 times how I felt about the film. "Could it be true?" people wondered of the absurd tagline: 'Was Shakespeare A Fraud?'; "are you outraged?" demanded others, inquiring whether my bardolatry had me on the defense; "why is Xenophilius Lovegood in it?" some pondered, rightly wondering why the bright and witty Rhys Ifans was on the poster. "I don't know yet" was my answer to questions 2 and 3 since I'd yet to actually see the movie; question 1 has long had a definitive "no" attached to it, complete with a long rant about the gross pretentiousness that accompanies each and every theory positing that William Shakespeare of Stratford-upon-Avon wasn't educated or rich or respectable enough to be talented.

No, the outrage never came.  And as for Ifans, I suspect it had little to do with anything other than the studio's need for a familiar face who could speak in a straight line and the actor's need for a paycheck.

Getting Dizzy on the Cyclone

I'm loving the fact that Atomic Vaudeville/Acting Up Stage's Ride the Cyclone has all the buzz in the world heading into the last 2 weeks of their sold-out run at Theatre Passe Muraille, not because I adored the show (it's good, but nothing to write home about), because it's weird. Really weird. And when it comes to weird, it's not easy to get much mainstream love. The fact that Ride the Cyclone, an off-beat, largely structure-less, potentially alienating exploration of youthful oddity is a bonafied hit gives me hope that Toronto's everyman eyes might finally be opening to the theatrical world that lives beyond The Lion King and Mirvish's gilded playbills. The talent and creativity behind the wackadoo show is plenty to get excited about, so I'm thrilled to find that people are indeed excited.

Shakespeare in Action: Romeo and Juliet

I am extraordinarily picky when it comes to Romeo and Juliet. I adore the play and have what my friend Maddi calls "thoughts and feelings" about it, meaning I'm overly attached to a very strict interpretation that exists in my head of the pedestalled piece. I know it like the back of my hand, to the point where I'm counting off the scenes as they go "okay, 1.5 down, wow they completely cut 2.1, straight into the balcony?". Basically, I'm an R and J geek who believes that Lord Capulet is a key character, it's grossly detrimental to try and stage it in period, Paris should be highlighted and that the only truly great Romeos are those elusive golden boys with the priceless ability to light up a room just by walking into it. Shakespeare in Action's student-geared, pared-down matinee version is far from perfect, but when Romeo and Juliet is taken off the page by the right director and ensemble, it sweeps you up until you don't care about the details anymore.

We at My Entertainment World have a long history of predicting the future. For instance, My TV sang the praises of 2011 Emmy winner Ty Burrell as early as March 2008, and current it-girl Emma Stone first hit the site in early 2009. At My Theatre we've been placing our bets on early-spotted favourites like Jesse Nerenberg and Jessica Moss for over a year now and they're yet to disappoint.

One of the greatest pleasures in growing up around aspiring theatre artists is seeing people you've known since they were 15 take to the stage and blow the audience away. I experienced just that this week when two actors I'd known separately years ago ended up playing Romeo and Juliet opposite one another.

So I got-to thinking about some of the most incredible performers I've ever encountered outside of my reviewing chair. They're alumnists of schools and programs I used to attend myself, all still performing, all under 25, all so brimming with talent that it's just a matter of time until people take notice even more than they already have. Two are singers I first heard when we sang operettas together at age 15; one travelled with me to Ireland 8 years ago; there are six university classmates, four high school castmates, three alumnists of a company I created and one from a company I volunteered for; and there's one current all-star student who impressed me when I went back to my old high school for a performance. (And some people fall into more than one of those categories). Some are my close friends, some I haven't talked to in years, some I've never really met, some I've already profiled on this site, some have yet to land their first real gig. But they all stood out as the best of the best of the talented crowds I've encountered over the years.

So without further ado, in alphabetical order, here are 18 names you WILL be hearing again:

The RLD Warns of FIREraisers 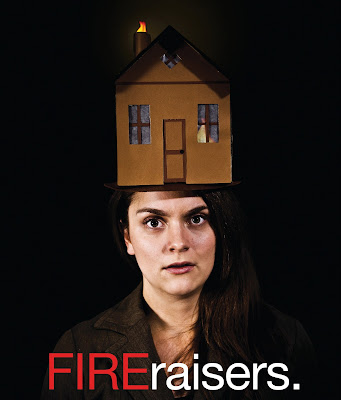 Toronto's Red Light District is the only company that's ever gotten me to like things I don't like- from audience participation to Trinity Bellwoods after 9pm to German expressionism to blatant stage sex. They sell all these off-putting adventures to this closed-minded critic by using them as mere wrapping paper for greater meanings that stay with me for weeks after the production. In a somewhat disappointing season for the company (two canceled productions and an underwhelming ... la ronde...), FIREraisers has proven a reassuring return to form, even if its director is different, its space is foreign and its text is entirely more modern than the company's usual fare. At its heart FIREraisers has things to say, and that's what I always think of when I think of the RLD.

“Spring Awakening” Stirs Energy and Passion from its Talented Cast I never saw the original production on Broadway; in fact, the F.U.D.G.E Theatre Company production (one of the first in the New England area) is my first foray into Spring Awakening’s dynamic rhythm of awakening youths. Impressed with the company’s summer production of Carousel, I was anxious to see Joe DeMita’s creativity in the punk-rock style, but, more specifically, I wanted to see if he would appreciate the German expressionism from the original play.

I wasn't disappointed in DeMita’s choices towards minimalism when it came to the set and staging. The stage is almost barren from start to finish- the actors bring on chairs, tables, and appropriate props to differentiate the scenes and locations- and stage manager Julia Murray keeps the production moving at a wonderful pace. DeMita’s creative use of ropes tethered to the ceiling, wrapped around characters, and tugged in interpretive choreography is effective in some points of the show, but it also distracts from the stunning chemistry and relationships between the actors. In a play about intimate bonds, I felt disconnected from the characters, wondering what the undead-looking ensemble members were going to do with the ropes next. I appreciate the wonderful metaphors around tying the characters up in their own confusion and emotions, but the choice ultimately detracts more than it adds. 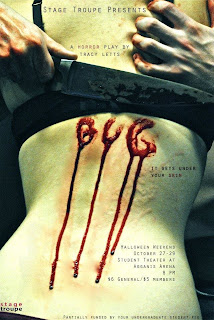 On a particularly stormy night, I ventured out to Boston University Stage Troupe’s production of Bug by Tracy Letts, directed by veteran Chris Hamilton, hoping for a night of horror and suspense.

Unfortunately, I was less than smitten with the results. Billed as “the play that gets under your skin,” I was not moved by the production or many of the performances in it. Thankfully, some secondary characters were compelling and spot-on, but too few, too late.

The horror was in the production team. From the sound design to set design, each piece was unified but off-point for the play. The sound was loud; tip: subtlety and silence are unnerving. The music, while appropriate to the themes of the play, didn’t fit with the concept of creating a horror story. I was greatly annoyed when music and fighter noise played during one of Peter’s speeches. As I will say below, Dan Stevens (Peter) can deliver a speech in an interesting and compelling way. Just let him speak!