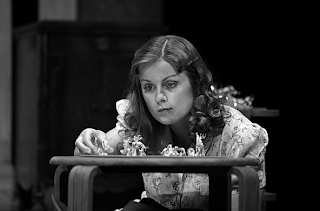 As the background notes in Soulpepper’s Glass Menagerie playbill remind us, Tennessee Williams had a preoccupation with delicate people. He loved them. Himself being a fairly delicate person, he found them the most sympathetic, the most relatable. I, who greatly admire Williams’ poetic language and unrelenting dedication to emotional complexity, really struggle with the plight of the delicate. I’m a rare harsh creature vastly more interested in those who can help themselves than those who will break if the world moves naturally around them. So, while over the years I have found that The Glass Menagerie is my favourite of Williams’ creations, I’ve come to see its literal and metaphorical preoccupations with delicacy as hurdles a strong company has to clear on its way to a great production.

Soulpepper’s recent take on the great play cleared the issues effectively, with only the occasional stumble over some of Williams’ more unavoidable insecurities.

Director Ted Dykstra put forth a fairly standard concept with no really notable decisions standing out from the set, light and sound teams either, putting the pressure squarely on his actors’ shoulders to make it great or ruin it completely.

For the most part the extremely talented company at Soulpepper was up to the task. Nancy Palk was a wonderful Amanda, prancing about as a sort of fun house mirror reflection of a once-great southern belle. Stuart Hughes was passable as Tom- his age was distractingly strange, though it sort of worked for the memory frame to play him many years in the future. And Jeff Lillico was charming and fun as the former golden boy Jim (or “Gentleman Caller” as he’s referred to on the cast list). Without fail, my favourite scenes in the play are those in which he encourages Laura and tells her he never noticed her limp- the bittersweet ramifications of his simple kindness just tear my heart to pieces every time. Gemma James-Smith’s take on Laura was partially wonderful and partially predictably annoying. She was so sweet and endearing and had a real gentleness to her that suited the role beautifully. But she also piled on the naivete, the hopelessness, the uselessness. With a little whimpering voice and a particularly pronounced limp, James-Smith’s Laura was the most delicate of the many delicate Williams portrayals I’ve seen. I will forgive her on the merits of her sweetness but it was quite a feat any moment she made me care about such a sad version of the character. In general though, the cast was decently strong. I don’t think Tom and Laura should have to worry about the southern accents the way that Amanda does though- having been raised further North most of their lives-, it makes it twice as hard for an actor to find moments of truth, when they’re having to think through the dialect the whole time.

There was not a lot to Soulpepper’s version of The Glass Menagerie. There were no big decisions, no departures, very little interpretation beyond Tom’s age and Laura’s particular weakness. It was an effectively executed, professional standard, decently enjoyable exercise that I found not altogether enlightened or enlightening.
Posted by Kelly at 10:55 p.m.